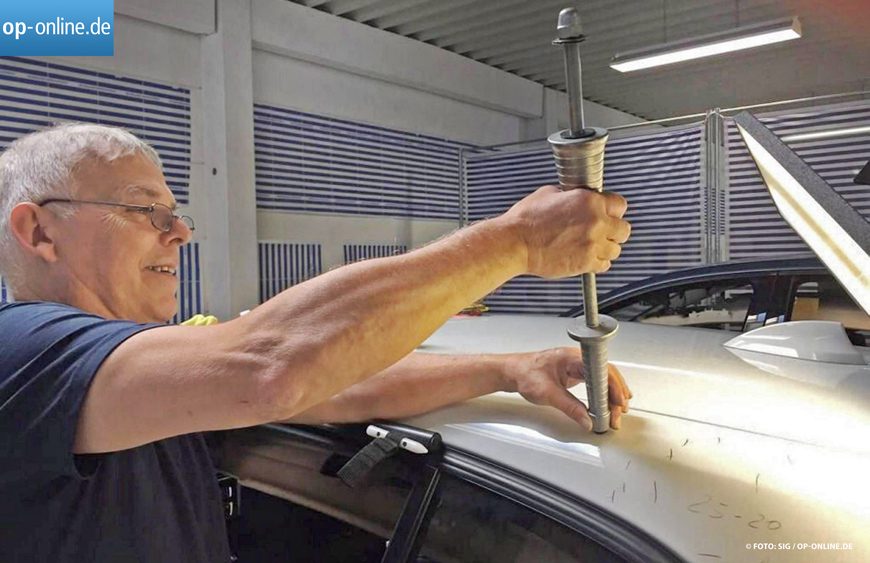 Mainhausen – The sky inside the BMW is suspended, Robert Ohl carefully pushes out the small dents in the roof of the car with a lever. There are hundreds of small dents that can only be seen with the help of a lamp. Ohl is part of the team of mechanics at Hagelschaden-Zentrum, which has its headquarters in Ulm. In a hall on Mainhausener Seestrasse, specialists have been cleaning up the damage caused by the devastating storm of August 18 since last Monday.

At the headquarters of the company, which was founded around 25 years ago, there are employees who follow various weather sites on the Internet which focus on hail. “As soon as a storm has fallen anywhere in Germany, employees drive to the epicenter,” explains sales manager Domeniko Cobic, who looks after customers with his team in Mainhausen.

If, as in the Offenbach district, thousands of cars have been demolished, a complete network is set in motion. A sufficiently large hall in which cars can be repaired has to be found quickly. Because the storm caused immense damage two and a half weeks ago, another location was added in Karlstein.

The company works with insurance companies that send their experts to the respective locations. In Mainhausen there are nine representatives from various insurance companies who assess the damage and decide whether a car is a total loss or whether a repair is worthwhile, in Karlstein there are five more. The company also recruits freelance and full-time auto mechanics.
Sales manager Domeniko Cobic, project manager Elena Seifert (left) and her assistant Sandy Hohe look after customers in Mainflingen. 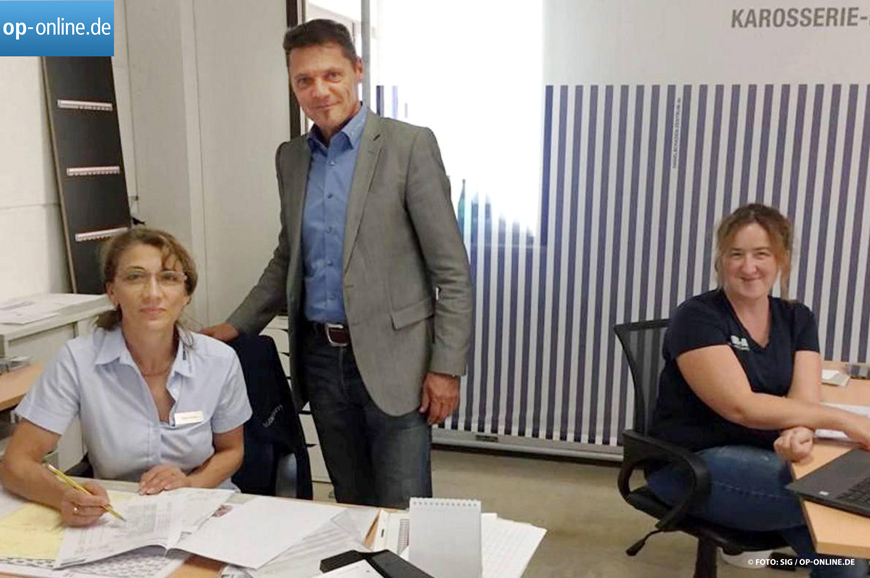 This is the purest sisyphean task. The car that has been most damaged so far had around 1,000 impacts on the roof alone, which had to be pushed out, says Cobic. The work still pays off because the mechanics are quick. Ohl fixes well over 100 dents per hour on average. How do you get the nerve for such a job? “It’s a passion,” he says. He has been pursuing this passion for 13 years. Thanks to it, the freelancer has traveled a lot in the world. In the USA, he was “pushing”, as the specialists call their work, several times. What sounds so banal, however, requires a great deal of sensitivity, because the paint must not be damaged. The car should then look like new again, only if the impact points have left edges and the paint is broken, parts are replaced, explains Cobic. “Original parts,” he emphasizes, after all, his employer gives a six-year guarantee.

Dent specialist Ohl demonstrates another trick in removing the damage to the hilt. If the hail has left dents in places that cannot be pushed out from the inside, it sticks a kind of suction cup onto the affected area and pulls out the sheet metal. This creates a bump, which he reworks with a pen-like instrument until the surface is even.

Cobic says the hailstorm wreaked havoc on the cars because it swept the streets almost horizontally. As a result, the wagons were also affected on the sides, which does not happen to this extent in every storm. “Many cars looked like they had been hit by machine guns.” Up until yesterday, more than 1,600 damaged cars were registered at both locations. The sales manager estimates that it will take up to four weeks for all damage to be recorded. The repairs will drag on for a while, he says. Once the “pushers” work is finished, the hall is cleared again.

FULL REPORT ON OP-ONLINE.DE
ALL NEWS